In my post, To Pube or Not to Pube, I posed a question:  Are you bathing your sexy parts the way your mother taught you, or the proper way?

Let me explain why Mother wasn’t always right.  For one thing, she was probably taught by her own mother.  The further back we go generationally, the closer we get to the Victorians.  And the Victorians were pretty wack about sexy parts.

The Victorian Era refers generally to the 1800s in Europe, named for Queen Victoria of England.  Queen V was notoriously down on sexy parts.  In fact, she found just about everything about sex to be pretty icky.  She wasn’t alone, though.  Prevailing notions about sex traced back to early Christian leaders such as Terteullian, who labeled woman “a temple built over a sewer,” and St. Augustine, who called for “passionless procreations.”

Some scholars believe that when the early Christians turned to ancient Hebrew writings to learn the will of God, they misunderstood the meaning behind some of the teachings.  The Hebrews focused on procreation because they were in great danger of being wiped out.  The early Christian translators wrongly assumed that references such as, “go forth, be fruitful, and multiply” meant that God approved the doing of the deed only when it made babies.

But think about it:  If God only wanted us to have babies, why on earth did he, or she, make sex our means of reproduction, and so pleasurable?  S/he could have just made us clone ourselves, like certain lizards.

Fast forward to the Victorians, and the story takes a strange twist.  They conceded that God probably wanted them to do the deed, just not to enjoy it very much.  This led to the popularity of the “missionary” position – so named because Christian missionaries who were spied upon by native peoples they were missioning to were seen in this position.  They wore long nightgowns with strategically placed holes that allowed penetration – but disallowed any lustful looking upon the body.  Men were viewed as having an animalistic nature that they had to battle with their minds and souls, only resorting to pleasures of the flesh when they absolutely had to (praying feverishly afterward).  Women were expected to find sex disgusting and to perform it solely as a duty to their mates.  A woman who writhed in ecstasy could be beaten and even cast aside by her husband.

No wonder we’re a sexually cuckoo culture.  Lest you think this doesn’t apply to you, remember:  Whether we like it or not, the Victorians are our closest cultural ancestors.  Even if your peeps came from elsewhere, or were the first residents here, the Europeans who came to take the land also imposed their culture and religion on the natives and those who arrived after.  Your parents may not have placed pokey devices on your genitals before you went to bed.  But I bet they didn’t encourage you to soothe yourself to sleep with a nice orgasm either.

So back to bathing.  Your parent probably instructed you, or demonstrated by example, to soap a large washcloth, place it over the area and scrub.  Maybe scrub a lot.  After all, it’s the source of what Augustine deemed “original sin” and should not feel too good.  There are problems with this.  For one, soap (and other bath and so-called “hygiene” products, such as vaginal sprays) can upset the balance of healthy microorganisms in the reproductive tract.  These good microbes are there to help keep the bad germs out.

For another, the tissues are sensitive.  Cloth can be rough and can chafe the area, also making it more vulnerable to nasty little invaders.  And scrubbing just passes the cloth over the area, actually missing some of the nooks and crannies where a dreaded substance called smegma (gasp!) can collect.

OK, let’s demystify smegma.  According to Wikipedia, it’s just a combination of shed skin cells, skin oils, and moisture that occurs in both female and male mammalian genitalia, collecting in males under the foreskin, and in females, around the clitoris and in the folds of the labia minora.

To cleanse the delicate skin and remove smegma, all that’s needed is warm water and fingers.  A woman, sitting in a bath or standing under a shower, can carefully separate the folds of her labia and swipe with her index finger, then gently push back the hood of the clitoris and do the same.  Fini!  For a man, it’s a simple matter of swiping around the coronal ridge, and especially while retracting the foreskin (if he has one).  Voila΄!  And there we have clean, cared-for sexy parts.

By the way, Queen V (the real queen, not your royal little snatch) probably wouldn’t approve of the French words I just used.  Ever heard the expression “Pardon my French?”  Today we use it to excuse a little profanity in our speech, the same as its origin in Victorian English.  But it also represents a bit of nationalistic Francophobia. The British liked to think that they were morally above the French, whom they thought of as sex-crazed.  Yet they did all the same things as the French, just a little less openly.  O, Merde! 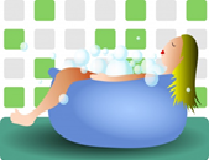 Where’s her other hand?  Gently manipulating the tender folds of Queen V, I hope!